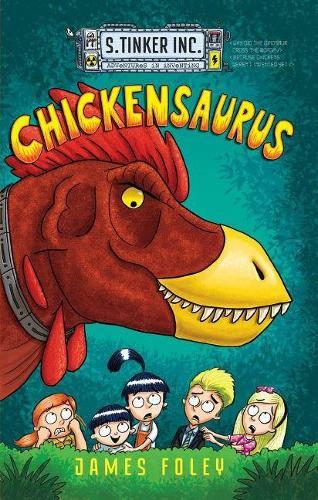 Sally Tinker, the world’s foremost inventor under the age of 12, is back with a new adventure in invention. When Sally’s nemesis hatches a fowl and poultry plot, there’s no room for the lily-livered. Sally and co will need all their pluck to return the world to its rightful pecking order. This is the fourth book in the S. Tinker Inc. series of graphic novels. When Sally’s archenemy Dexter Maelstrom invites her to a demonstration of his new invention, she doesn’t expect it to actually work. Dexter’s De-Evolving Ray can turn chickens into dinosaurs! But when Dexter’s chickensaurs breaks free and go on the hunt, Sally - along with her friend Charli and her baby brother Joe - must avoid becoming chicken feed. Is Dexter behind this dastardly plan - or is somebody else the bad egg?