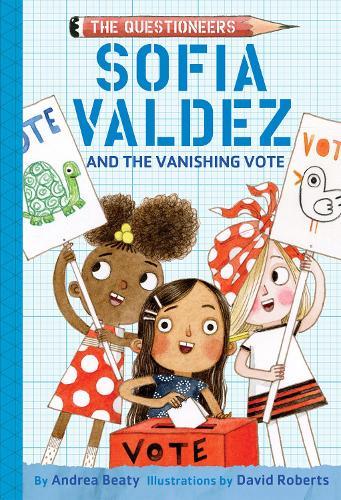 Miss Lila Greer announces it’s time for Grade Two to get a class pet, and she wants the kids to participate in choosing which one. After all, they will all have to share the responsibility of caring for it.
The class narrows it down to two options: Team Turtle and Team Bird. Sofia is named Election Commissioner, in charge of overseeing a fair and honest election between the two teams. There’s a classwide campaign, complete with posters, articles, and speeches. Then, it’s time for the election! But when the votes are counted, there’s a tie, and one vote is missing.
How will the class break the tie? And what happened to the vanishing vote? It’s up to Sofia Valdez and the Questioneers to restore democracy!
$17.99Add to basket ›

#1 New York Times bestselling Rosie Revere is back and starring in her first chapter book!

When Rosie Revere's Uncle Ned gets a little carried away wearing his famous helium pants, it's up to Ada and friends to chase him down. As Uncle Ned floats farther and farther away, Ada starts asking lots of questions: How high...

Sofia is put in charge of overseeing a fair election for a class pet, but first the Questioneers must learn about elections and good journalism--and remember that being a community matters most. Includes facts about the Delano...

END_OF_DOCUMENT_TOKEN_TO_BE_REPLACED

Wednesday Weeks and the Tower of Shadows (Book 1)

END_OF_DOCUMENT_TOKEN_TO_BE_REPLACED

We Are Explorers: Extraordinary Women Who Discovered the World

Taking the Lead: How Jacinda Ardern Wowed the World

Girl of the Southern Sea