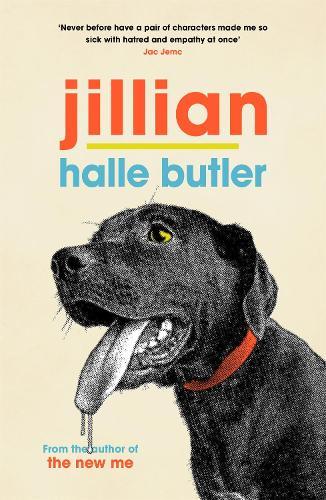 Twenty-four-year-old Megan may have her whole life ahead of her, but it already feels like a dead end, thanks to her dreadful job as a gastroenterologist’s receptionist and her heart-clogging resentment of the success and happiness of everyone around her. But no one stokes Megan’s bitterness quite like her coworker, Jillian, a grotesquely optimistic, thirty-five-year-old single mother whose chirpy positivity obscures her mounting struggles.
Megan and Jillian’s lives become increasingly precarious as their faulty coping mechanisms–denial, self-help books, alcohol, religion, prescription painkillers, obsessive criticism, alienated boyfriends, and, in Jillian’s case, the misguided purchase of a dog–send them spiraling toward their downfalls.
Wickedly authentic and brutally funny, JILLIAN is a subversive portrait of two women trapped in cycles of self-delusion and self-destruction, each more like the other than they would care to admit.

Halle Butler’s Jillian is a whole-body cringe, can’t-look-away experience of vicarious mortification. The second novel by Butler to be published in Australia, following The New Me which delighted Readings’ staff last year, it is in fact her debut – though you wouldn’t know it.

The eponymous Jillian is a thirty-five-year-old fantasist, single mother to a preschooler, and one of two women who begrudgingly work in a Chicago office organising colons and their owners for a gastroenterologist. Megan is the other – twenty-four, aggressively insecure, and channelling her itching ennui into a vicious preoccupation with her co-worker’s shortcomings. It’s so all-consuming that after a fight, Megan’s boyfriend Randy makes a ‘peace offering’ by asking Megan about Jillian. Megan replies, ‘She continues to be a thick strand in the malevolent web of my daily routine.’

With two films to her credit, it’s no surprise that Butler’s dialogue is inescapably audible. Her writing is also unsparing in its physical specificity. Acutely sensitive to the many humiliations and uncertainties of her own relatively comfortable existence and afflicted by an all-too-frequent hangover after yet another night of being enraged by her peers’ self-expression and achievements, Megan feels: ‘totally ridiculous sudsing her buttcrack with the teal plastic bath poof while crying and thinking about the future.’ Butler excels at these moments of crushing, abject banality.

While Megan appears to manifest Butler’s own disdain for capitalist expectations, Jillian radiates a toxic positivity incompatible with reality. Despite having no capacity to pay pressing fines or her son Adam’s childcare fees, Jillian is determined to adopt a special-needs dog. Elena, a ‘friend’ from church upon whom Jillian must rely to ferry Adam to and from childcare after her car is impounded, reflects with cheerful complacency that if she chose to murder Adam and bury him in the woods, she would get away with it as nobody would believe Jillian. Fortunately, Elena has no real interest in murder.

Jillian is an excruciating and often hilarious tale of two lost souls, each subconsciously bent on a rapid course of everyday self-sabotage.