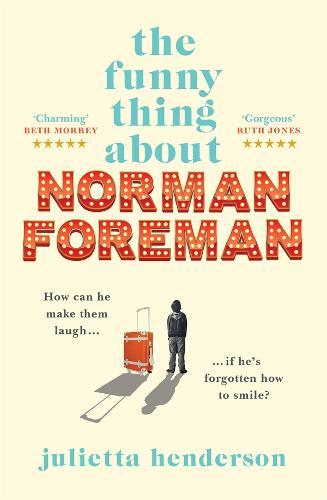 What do you get when you cross a painfully awkward son, lofty comedic ambition and a dead best friend? Norman.
Norman and Jax are a legendary comedy duo in the making, with a five-year plan to perform at the Edinburgh Fringe by the time they’re fifteen. But then Jax dies before they even turn twelve.
Norman’s mum Sadie knows she won’t win Mother of the Year anytime soon, and she really doesn’t know, or care, who Norman’s father is. But her heart is broken when she discovers her grieving son’s revised plan- ‘Find Dad’ and ‘Get to the Edinburgh Fringe’.
If meeting his dad and performing at the Festival are the two things that will help Norman through this devastating time, then Sadie is going to make them happen.
So mother and son set off from Cornwall, with their friend Leonard in his vintage Austin Maxi, on a pilgrimage to Edinburgh - to honour Jax and to track down a few maybe-fathers on the way…
Little Miss Sunshine meets Wonder meets A Man Called Ove in this stunning debut novel that will touch your heart.
$32.99Add to basket ›