Napoleon’S Stolen Army: How the Royal Navy Rescued a Spanish Army in the Baltic 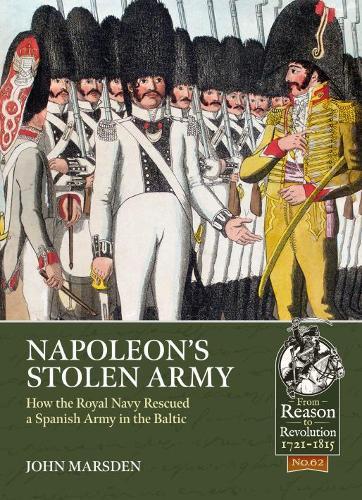 Napoleon’S Stolen Army: How the Royal Navy Rescued a Spanish Army in the Baltic

This is the story of a Spanish army, commanded by the Marques de La Romana, which was sent to Denmark by Napoleon in 1807, whilst France and Spain were allies bound by the Treaty of San Ildefonso, signed in 1796. When relations between the two countries broke down in May 1808 they were soon at war with each other, and La Romana’s host became, in effect, a captive army in the hands of the French. When Spain looked to forge an alliance with Britain against her erstwhile ally, they found the British government only too eager to help. The Royal Navy’s dominant presence in the Baltic provided a ready opportunity to seal the new alliance and, once the political groundwork had been laid, plans for a daring rescue of the entrapped Spaniards by Vice Admiral Keats' squadron were drawn up. However, whilst efforts were being made by the British to accumulate and prepare a sufficient amount of shipping to carry out the operation, difficulties soon arose in making contact with La Romana in order to convey to him the intentions of the Spanish and British high commands. This almost led to disaster, and the whole operation was saved only by some remarkable strokes of fortune, and the magnificent leadership provided by Keats and La Romana. Until now this remarkable and little-known story has had little coverage in the various histories written about the Peninsular War, and what has been said about it in the Anglosphere has been confined to a description of events taken almost solely from a British perspective. Now, with access to a comprehensive collection of documents in the Spanish archives, it is possible to tell the story of the Spanish contribution to the successful operation in the Baltic, when the greater part of La Romana’s army was evacuated from Danish Baltic territory during the summer of 1808. Due to circumstance and bad fortune, a significant part of the Spanish army was left behind during the Royal Navy’s action, and there is an interesting story told about what became of these men, related via the personal accounts left by two of the soldiers who did not return to Spain with La Romana. AUTHOR: After graduating from the University of Sheffield, John Marsden spent some years teaching Computer Science to sixth form students at Mexborough School, before returning to university to take a postgraduate degree in Control Sytems. A career in IT Systems (defence and telecommunications) was to follow, during which he became a director of a small company offering services to the IT industry. Marriage to his Spanish wife has stimulated an interest in Spanish culture, literature, and history: mainly, though not exclusively, relating to the Peninsular War. His knowledge of Spanish has allowed him to bring to light a number of documents relating to that conflict currently lying in the Spanish military archives. He lives in Hampshire and has two grown up children, Joseph and Teresa. This is his first book.