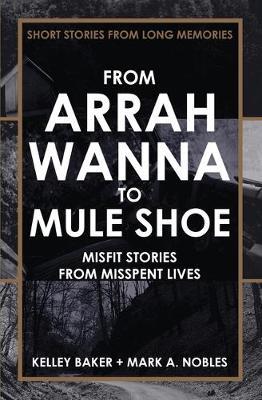 Arrah Wanna (pronounced Arr-uh wa-nna) - (noun) A Baptist Church camp in the mountains where a fourteen-year-old, disillusioned believer is busted for drugs. Muleshoe - (pronounced Mule-shoo) (noun) A town in Texas that one must pass through to get to the crossroads if you’re going to meet up with the devil and have your wildest dreams come true. Kelley Baker and Mark A. Nobles are a couple of misfits who’ve misspent their lives knocking around the film business, pissing people off, alienating friends, family, and ex-wives, all the while collecting stories and emotional scars. They finally got around to putting those stories to paper and decided to combine their efforts in this collection of prose. Fair warning, these stories are as misfit as their authors. From the joys of youth helping your dad at a used car lot, to standing up a young woman so you’ll always be a fond memory and not the loser you know you are or working in a trophy factory for a demented hoarder to being pummeled by a chain smoking, four-foot-tall bar owner who loves professional wrestling. Watching a beautiful sunrise as your father walks out of your life forever, to being rushed into emergency heart surgery and wondering if this is the end. From Arrah Wanna to Mule Shoe wanders, ambles, and stumbles through a literary landscape littered with half-truths, bone truths, and magical realities. Baker and Nobles may have misspent their lives, but they firmly believe a portion of yours would be well spent reading this collection. There’s an awful lot of living being done in the miles between Arrah Wanna and Muleshoe. None of it is easy, some of it is strange, but all of it is real.