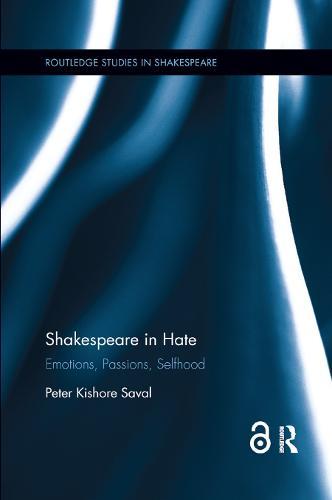 Hate, malice, rage, and enmity: what would Shakespeare’s plays be without these demonic, unruly passions? This book studies how the tirades and unrestrained villainy of Shakespeare’s art explode the decorum and safety of our sanitized lives and challenge the limits of our selfhood. Everyone knows Shakespeare to be the exemplary poet of love, but how many celebrate his clarifying expressions of hatred? How many of us do not at some time feel that we have come away from his plays transformed by hate and washed clean by savage indignation? Saval fills the great gap in the interpretation of Shakespeare’s unsocial feelings. The book asserts that emotions, as Aristotle claims in the Rhetoric, are connected to judgments. Under such a view, hatred and rage in Shakespeare cease to be a blinding of judgment or a loss of reason, but become claims upon the world that can be evaluated and interpreted. The literary criticism of anger and hate provides an alternative vision of the experience of Shakespeare’s theater as an intensification of human experience that takes us far beyond criticism’s traditional contexts of character, culture, and ethics. The volume, which is alive to the judgmental character of emotions, transforms the way we see the rancorous passions and the disorderly and disobedient demands of anger and hatred. Above all, it reminds us why Shakespeare is the exemplary creator of that rare yet pleasurable thing: a good hater.