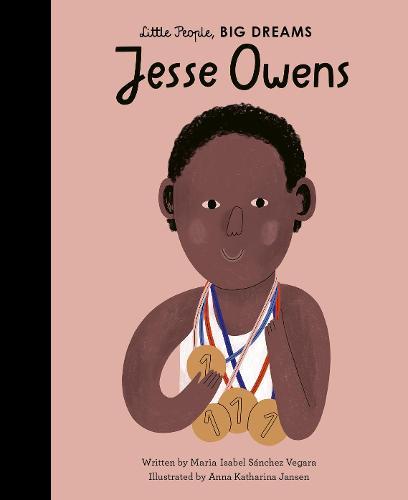 In this book from the critically acclaimed Little People, Big Dreams series, discover the life of Jesse Owens, the great track and field star.
Little Jesse, originally J.C., was born in Oakville, Alabama, during segregation. When he was nine, he moved with his parents and nine brothers and sisters to Cleveland, Ohio, to find a better life. There, he found his passion for running, and was making national headlines by high school, where he equalled the world record in the 100-yard dash. It was during the 1936 Berlin Summer Olympics that he established himself as a legend, winning four gold metals that also delivered an unforgettable blow to Hitler and racism.
This moving book features stylish and quirky illustrations and extra facts at the back, including a biographical timeline with historical photos and a detailed profile of the athletes life.
Little People, Big Dreams is a bestselling series of books and educational games that explore the lives of outstanding people, from designers and artists to scientists and activists. All of them achieved incredible things, yet each began life as a child with a dream. This empowering series offers inspiring messages to children of all ages, in a range of formats.
$19.99Add to basket ›

END_OF_DOCUMENT_TOKEN_TO_BE_REPLACED

My Smile Diary: An Illustrated Journal with Prompts

Making A Baby: An Inclusive Guide to How Every Family Begins