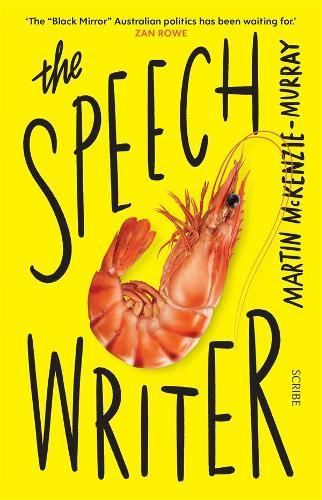 In his fiction debut, erstwhile speechwriter and Saturday Paper journalist Martin McKenzie-Murray takes us on a frantic, funny, and surreal journey through the corridors of power.
Toby, former speechwriter to the PM, has reached a new low – locked behind bars in a high-security prison, with sentient PlayStations storming the city outside, and the worst of Australia’s criminals forcing him to ghost-write letters to their loved ones or have his spine repurposed as a coat-rack. How did he get here? From the vantage point of his prison cell, Toby pens his memoir, trying to piece together how he fell so far, all the while fielding the uninvited literary opinions of his murderous cellmate, Gary.
What Toby unspools is a tale of twisted bureaucracy, public servants gone rogue, and the ever-present pervasive stench of rotting prawns (don’t ask). Realising that his political career is far from the noble endeavour he’d once imagined it would be, Toby makes a bid for freedom … before the terrible realisation dawns – it’s impossible to get fired from the public service. Refusing to give up (or have to pay for his relocation fee), Toby’s attempts to get fired grow more and more extreme, and he finds himself being propelled higher and higher through the ranks of bureaucracy.

It is a funny old time to be writing political satire. I mean, satire is everyday reality in our year 2021. And so, when a political satire comes along, I am eager to see where it can possibly go. The answer is inwards, and in Martin McKenzie-Murray’s The Speechwriter, we explore the inner workings of a nascent political powerbroker.

Toby has grown up with the collected speeches of Churchill and the injustice of being denigrated for his seriousness at school. In the first of many literal embodiments of frustrated ideals, a young Toby with gastro literally soils his collected speeches of Churchill before he has had a chance to read them. In Toby we have a frustrated idealist: frustrated by growing up in an environment that doesn’t seem to care about lofty ideals, and frustrated by his own inability to transcend them.

This is a satire for all of us who can see ourselves in Toby. He is McKenzie-Murray’s everyman of early 21st century political idealism, crystallised by The West Wing and running afoul of the growing tide of populist rhetoric. As each day of the last few years seems to have brought a new level of crisis to the world and the absurdity of political response, I take heart in one of Toby’s early acts of government service. In a moment more Parks and Recreation than The West Wing, Toby and a local constituent share a moment of connection while burying birds that have been the victims of feral cat attacks on the median strip: ‘Silently we dug six small trenches with our hands. I slowed my pace to match Arthur’s, who seemed to be struggling, uncomplainingly, with arthritic fingers.’

A satire needs heart as much as cleverness to be effective, and in these moments Martin McKenzie-Murray delivers – on the median strip.