Manticores are not Real 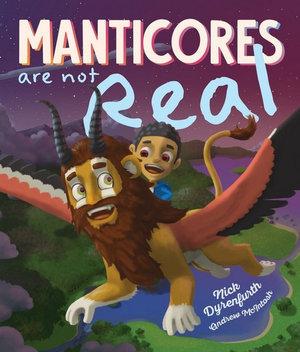 Manticores are not Real

This is a brief, fast-paced rhyming adventure of a small boy Micah’s ‘dream inside a dream’ of meeting a Manticore - a mythical (Persian) creature who in this instance bears the face of a man, the body of a lion, horns of a gazelle and the wings of a flamingo. Those features are drawn from Micah’s original dream of a ‘wild hullaballoo’ of lions, flamingos and gazelles.
He is woken - or thinks he is woken - by the commotion caused by the crash landing of a sneezing, lost beast called Marco in his backyard. Micah travels on Marco’s back to his home to attend the ‘grand party’. He discovers that Manticores exist along with a host of other creatures who were thought to have departed earth, at least according to Micah’s parents.
Micah and Marco attend the raucous grand party and, exhausted, return home. Micah is woken to the sound of his dad playfully scolding him for sleeping in. The story ends with Micah thinking that it was just a dream but Marco peering through the bedroom window.
$14.95Add to basket ›