One Piece: Ace’s Story, Vol. 1: Formation of the Spade Pirates 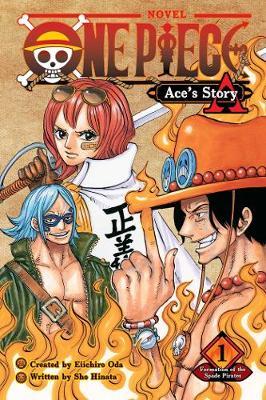 One Piece: Ace’s Story, Vol. 1: Formation of the Spade Pirates

Adventure on the high seas continue in these stories featuring the characters of One Piece! Get the backstory on Luffy’s brother Ace! This volume contains the origin story of Luffy’s adopted brother Ace, and tales of his thrilling quest for the legendary One Piece treasure. Washed up on the shores of a deserted island at the edge of the East Blue Sea, two men from different backgrounds unite in their shared thirst for adventure. One of them, Portgaz D. Ace, will follow in his infamous father’s footsteps as the fearless captain of a pirate crew. The other, Masked Deuce, becomes the reluctant first member of Ace’s Spade Pirates. Survival is not enough for these seafaring buccaneers, as together they seek treasure, excitement, and a route to the New World.