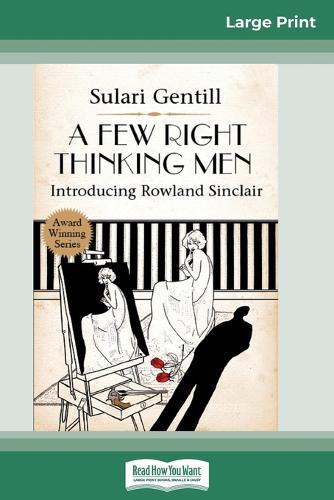 Not Miss Fisher, but Mr. Sinclair a ] Meet Rowland Sinclair, gentleman and artist living in 1931 Sydney. Friend of the Left, son of the Right, he paints in a superbly tailored, three-piece suit and houses friends who include a poet, a painter, and a feminist sculptress whom he has painted nude and hung it in the drawing room. Is he perhaps in love with Edna? If so, she isn’t having any. Sinclair’s life of ease, it may be said almost that of playboy, is akin to that of the era’s English gentlemen. He’s the third son of a vastly wealthy family with large estates and homes, whose middle brother was killed in the war, and older brother, Wilfred, forever bruised. Rowland and Wilfred are often at odds. And his fortune and his indifference to politics keep him sheltered from mounting tensions fueled by the Great Depression, which is roiling Australia and taking it near the brink of revolution. And the crowd he hangs with is tinged with scandal and puts him at odds with his conservative family and the country’s Establishment-with all but his adventurous, bachelor uncle, the elder Rowland Sinclair, a kindred soul. One day in December, 1931, comes terrible news knocking at the door: Uncle Rowly has been murdered in his home by unknown assailants, his elderly housekeeper, the only, and shaky, witness. This brutal murder not only shocks Rowland, and all the family, but prompts him to infiltrate the echelons of the old and new guard which have both surfaced during these dark times alongside other ideologies. Among them are a few “”“‘'right thinking men, ”“”“ a cadre of conservatives who became convinced of a Communist takeover and formed a movement to combat it. His investigation in time exposes an extraordinary conspiracy with direct personal consequences. A Few Right Thinking Men is the first in the award-winning Rowland Sinclair Mysteries sure to appeal to fans of Jacqueline Winspear’s Maisie Dobbs and of Kerry Greenwood’s Miss Phryne Fisher, with a touch of the Lord Peter Wimsey of Harriet Vane days.