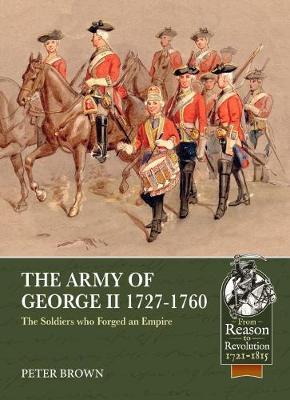 The Army of George II is often forgotten, as 18th century British military history is bookended by the victories of the Duke of Marlborough during the War of the Spanish Succession and the final defeat of Napoleon by the Duke of Wellington. Yet it was in this period that Britain rose to prominence, not only as a European, but also as a world power, defeating the French in India, North America, and the Caribbean and fighting them in two major wars in Europe. Great leaders emerged, such as Robert Clive and James Wolfe, whilst the private soldiers proved themselves to be adaptable, stoic, and, above all, brave in the face of extreme hardship. This was the army that crushed French colonial ambitions and in so doing laid the groundwork for the British Empire. In this book you will find details of how the army was recruited, funded, and how it functioned day-to-day. Details are also provided of the uniforms worn by infantry, artillery, and cavalry; how they were organised, paid, and punished. There are also new insights into the logistics of 18th century warfare, how the soldiers performed in battle, both in Europe and in the colonies, and what medical treatment they could expect when the battles were over. This book provides a unique insight into what it was like to serve in the Army of King George II. AUTHOR: Peter Brown is a Bath-based artist, an all-weather painter of street scenes and city landscapes. Known for working directly from his subject, he is more affectionately known as ‘Pete the Street’. 30 b/w illustrations, 16pp colour plates