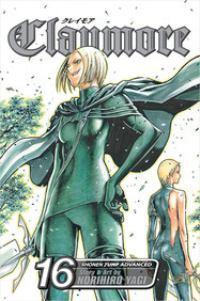 A New York Times best selling, multi-arc, character-driven story with great battles and strong-willed females that will appeal to males and females alike. In a world where monsters called Yoma prey on humans and live among them in disguise, humanity’s only hope is a new breed of warrior known as Claymores. Half human, half monster, these silver-eyed slayers possess supernatural strength but are condemned to fight their savage impulses or lose their humanity completely. After Miria’s incredible revelations about the origins of the Yoma, the seven warriors split up to settle their affairs and say their goodbyes in preparation for the final battle against the Organization. Helen and Deneve fall in with a spirited young warrior of the current generation and soon find themselves confronting the Organization’s latest, most terrible weapons.