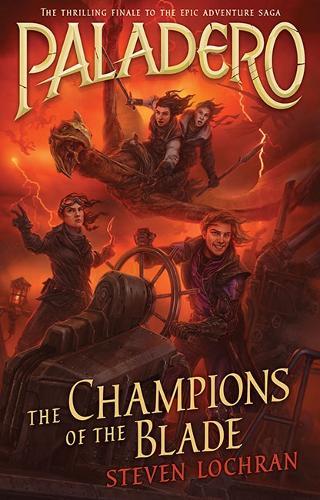 Joss, Hero and Drake are prentice paladeros, cowboy-knights that ride dinosaurs and fight to protect their Kingdom. Now, they face the ultimate battle: themselves.
The Kingdom of Ai is under siege. The Shadow God and his Court of Thralls are ready for war, and Joss and his brethren have a critical mission - to marshal the forces that will defend their land. But not everyone is willing to heed the call, least of all the former paladeros known as the Nameless. And with traitors in their midst, their mission is treacherous even before they’ve encountered the ever-growing Court of Thralls - and their fire-breathing dragons.
Faced with more enemies than ever before - including people he once trusted with his life - Joss must somehow convince the Kingdom’s potential allies that their cause is worth fighting for. But with his faith in the paladero way of life fading fast, he must first convince himself …
In the final instalment of this mesmerising fantasy series by Steven Lochran, readers are taken on a breathtaking ride through the kingdom of Thunder Realm. Perfect for fans of Diana Wynne Jones and the Ranger’s Apprentice series by John Flanagan.
$19.99Add to basket ›

Welcome to Thunder Realm, where cowboy-knights known as paladeros herd dinosaurs during peacetime, and take up arms during war. Joss, a young orphan, has always wanted to be a paladero - but first he must prove himself by going on...

The Edge of the World: Paladero Book 3

Joss, Hero and Drake are prentice paladeros, cowboy-knights that ride dinosaurs and fight to protect their Kingdom. Now, they face the ultimate battle: themselves.