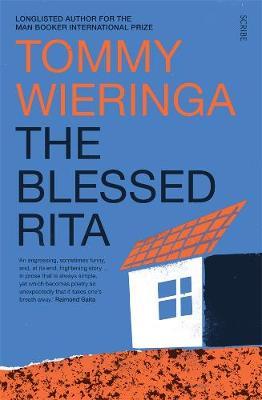 ‘He had seen more and more people from the East in recent years. Mostly gypsies, people said. Bulgarians, Romanians - you could tell by the plates on the vans and the trailers. The Poles had been around for some time already. Burglaries, thefts. The blessings of the new Europe.‘

Paul Krüzen lives with his father in an old farmhouse, not far from the German border. Where once his father took care of him, now he takes care of his father. It has been a long time since his beautiful, worldly-wise mother left them for the arms of a Russian pilot, never once looking back.
Paul’s world is changing: his small Dutch village is now home to Chinese restaurateurs, Polish plumbers, and Russian thugs. Saint Rita, the patron saint of lost causes, watches over Paul and his best friend Hedwiges, two misfits at odds with the modern world, while Paul takes comfort in his own Blessed Rita, a prostitute from Quezon. But even she cannot protect them from the tragedy that is about to unfold.
In this sharply observed, darkly funny novel, Wieringa shines a light on people struggling at the margins of a changing world. The Blessed Rita is an affecting tribute to those left behind and an ode to those wanting to transcend themselves and their heritage.
$32.99Add to basket ›