Too Brief a Treat: The Letters of Truman Capote 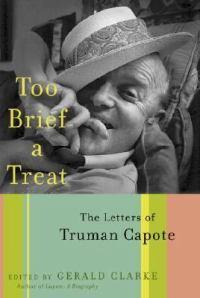 Too Brief a Treat: The Letters of Truman Capote

Truman Capote was hailed as one the most meticulous writers in American letters-a part of the Capote mystique is that his precise writing seemed to exist apart from his chaotic life. While the measure of Capote as a writer is best taken through his work, Capote the person is best understood in his personal correspondence with friends, colleagues, lovers, and rivals.
In Too Brief a Treat, the acclaimed biographer Gerald Clarke brings together for the first time the private letters of Truman Capote. Encompassing more than four decades, these letters reveal the inner life of one of the twentieth century’s most intriguing personalities. As Clarke notes in his Introduction, Capote was an inveterate letter writer who both loved and craved love without inhibition. He wrote letters as he spoke: emphatically, spontaneously, and without reservation. He also wrote them at a breakneck pace, unconcerned with posterity. Thus, in this volume we have perhaps the closest thing possible to an elusive treasure: a Capote autobiography.
Through his letters to the likes of William Styron, Gloria Vanderbilt, his publishers and editors, his longtime companion and lover Jack Dunphy, and others, we see Capote in all his life’s phases-the uncannily self-possessed na-f who jumped headlong into the dynamic post–World War Two New York literary scene and the more mature, established Capote of the 1950s. Then there is the Capote of the early 1960s, immersed in the research and writing of his masterpiece, In Cold Blood. Capote’s correspondence with Kansas detective Alvin Dewey, and with Perry Smith, one of the killers profiled in that work, demonstrates Capote’s intense devotion to his craft, while his letters to friends like Cecil Beaton show Capote giddy with his emergence as a flamboyant mass media celebrity after that book’s publication. Finally, we see Capote later in his life, as things seemed to be unraveling: when he is disillusioned, isolated by his substance abuse and by personal rivalries. (Ever effusive with praise and affection, Capote could nevertheless carry a grudge like few others).
Too Brief a Treat is that uncommon book that gives us a literary titan’s unvarnished thoughts. It is both Gerald Clarke’s labor of love and a surpassing work of literary history.
$49.99Add to basket ›