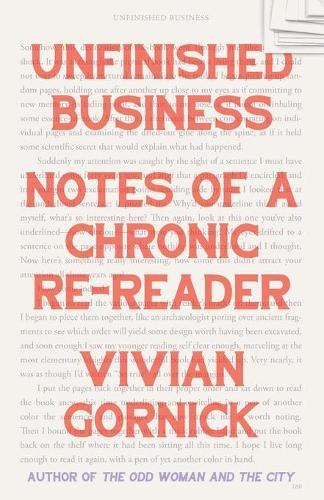 I sometimes think I was born reading … I can’t remember the time when I didn’t have a book in my hands, my head lost to the world around me.
A celebration of the delights of re-reading from the acclaimed author of The Odd Woman and the City.
In nine essays that meld criticism and memoir, Gornick returns to the books that have shaped her. She finds herself in contradictory figures in D.H. Lawrence’s Sons and Lovers, assesses womanhood in Colette, and considers the veracity of memory in Marguerite Duras’s The Lover. She uncovers the psychological complexity of Elizabeth Bowen’s prose, and soaks in Natalia Ginzburg, ‘whose work has often made me love life more'. After adopting two cats, whose erratic behaviour she finds vexing, she discovers Doris Lessing’s Particularly Cats.
From a young New York reporter, to a critic exploring gender and feminism, to a woman in the jubilant solitude of older age: the characters Gornick meets in literature speak to the person she is when reading, and in reopening her favourite texts she meets characters anew. Infused with her trademark verve and insight, this is a masterful appreciation of literature’s ability to illuminate, from a peerless writer who ‘still read[s] to feel the power of Life with a capital L'.
$22.99Add to basket ›