Unbowed: A Soldier’s Extraordinary Journey Back from Paralysis 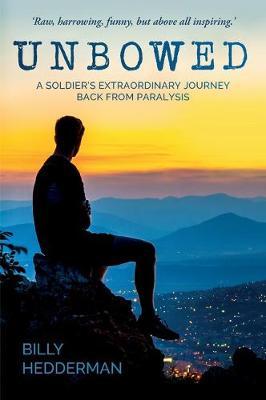 Unbowed: A Soldier’s Extraordinary Journey Back from Paralysis

‘I woke to the sight of a hospital ceiling. For that first blissful second, I forgot that I was paralysed.’ On 31 December 2014 Billy Hedderman suffered a catastrophic injury to his spinal cord while body-boarding on the Sunshine Coast, paralysing him almost completely from the neck down. When asked if he would walk again, his doctor simply said, ‘I dunno … maybe.’ Yet, incredibly, within just seven months of his injury, he was able to beat the odds and run a 10km race in under an hour. This is the powerful story of Billy’s recovery and a fascinating account of his service as an Officer in the elite Special Forces unit, the Army Ranger Wing of the Irish Army. It was from this service that he took the never-say-die attitude that helped him prevail against all medical expectations to recover and serve as an Infantry Officer in the Australian Army. It is a story of almost unbelievable personal resilience and mental toughness, which will amaze and inspire.