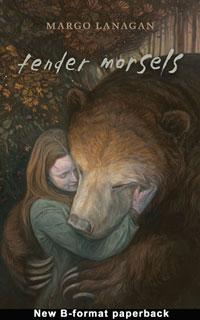 Liga’s life is filled with dark hearts and foul deeds. So she chooses a protective path of natural magic to find a safe other-worldly place for herself and her two daughters. But when magicked bears and mischief men break the borders of their refuge the girls must face the truth, and engage with the appeal and risk of the real raw world.
Tender Morsels unflinchingly explores the evil and sweetness in the world and the magic of learning to live with both.

Margo Lanagan is best known as a writer for young adults, but this is one Oz author who should not be pinned down. She delves into the realms of fairytale and folklore, sinking deep into the unconscious to pluck out her narratives. A reader so inclined could therefore read her work as an academic exercise. I prefer to allow myself to be swallowed whole by the story, its world and the beauty of its prose.

Liga is an uneducated peasant who is sexually abused by her father and as a result has a daughter. Later she is raped by a group of local men and falls pregnant again. On the brink of total despair she is rescued by a witch who gives her passage into ‘heaven’ – transforming her world into a safe haven where pain can no longer touch her. Yet as her daughters grow they are drawn out to the boundaries of this world, where suffering and danger threaten to seep back in.

Like the world the girls inhabit, this novel is scattered with jewels ready to be discovered by anyone willing to tread on its winding paths.