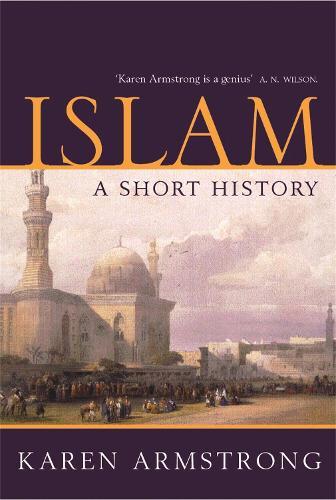 In the public mind, Islam is a religion of extremes: it is the world’s fastest growing faith; more than three-quarters of the world’s refugees are Islamic; it has produced government by authoritarian monarchies in Saudi Arabia and ultra-republicans in Iran. Whether we are reading about civil war in Algeria or Afghanistan, the struggle for the soul of Turkey, or political turmoil in Pakistan or Malaysia, the Islamic context permeates all these situations.
Karen Armstrong’s elegant and concise book traces how Islam grew from the other religions of the book, Judaism and Christianity; introduces us to the character of Muhammed; and demonstrates that for much of its history, the religion has been a force for enlightenment that promoted liberties for women and allowed the arts and sciences to flourish. Islam shows how this progressive legacy is today often set aside as the faith struggles to come to terms with the economic and political weakness of most of its believers and with the forces of modernity itself.
$12.95Add to basket ›