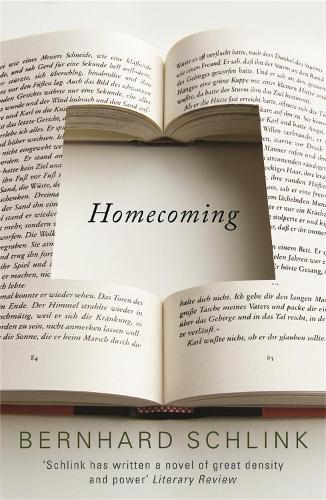 As a child raised by his mother in post-war Germany, Peter Debauer becomes fascinated by a story he discovers in the proof pages of a novel edited by his grandparents. It is the tale of a German prisoner of war who escapes from a Russian camp and braves countless dangers to return home to a wife who believes him to be dead. But the novel is incomplete and Peter becomes obsessed by the question of what happened when the soldier and his wife met again. Years later, the adult Peter remembers the novel and embarks on a search for the missing pages that soon becomes a mysterious search for his own father, a German soldier whom he always believed was killed in the war.

I’ll always remember the special experience of reading the advance copy of Schlink’s The Reader without any expectations at all - and being completely blown away! That it then went on to be a world-wide bestseller (and is soon to be a film I believe) was naturally immensely gratifying! Since then there have been some well-received story collections - and some of Schlink’s original genre, crime fiction, translated into English for the first time - but this is the first full-length novel for 10 years. Homecoming has definite parallels with the former book - the cool, clear, precise prose; the main character’s attempt to reconstruct an aspect of the (Nazi) past (and that not least through the act of reading!); the thematic of the hidden biography; and the (Odyssean) journey that is so often what the quest for personal knowledge and understanding is all about.

It begins in the 1950s, where we trace the early life of the main character, Peter Debauer - brought up by his mother after his father perished in the war - who spends his summers with his paternal grandparents in Switzerland. They supplement their income by editing cheap pulp fiction - usually stories of soldiers returning from the war. Young Peter is allowed to use the proof pages for writing and drawing, but is forbidden to turn the page and read the texts themselves. His childlike curiosity gets the better of him of course, and he reads about a soldier who returns home from Stalingrad, only to find that his wife has taken a new man, and also has a child by him. The ending of the story, however, is missing. Years later, Peter remembers this story again, and wonders about the authorship, and how the story ended. This leads him to the discovery that his own father is actually still alive … but also stood uncomfortably near to the Nazi regime, and has reinvented himself under a new name in the US. A quest, a journey into history and personal identity, Homecoming is again an absorbing, intensely moving work from Schlink!

END_OF_DOCUMENT_TOKEN_TO_BE_REPLACED

Guilt About the Past

A mesmerising tale of discovery, of the search for identity and of the need for understanding and forgiveness.