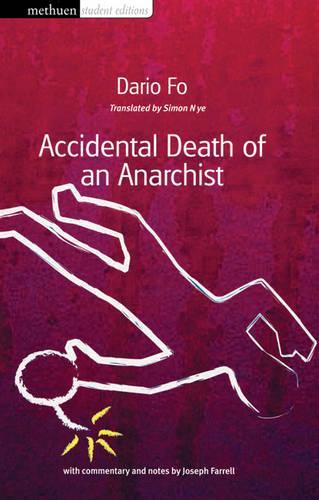 ‘The quality that makes Fo uniquely powerful [is] the ability to wring wild laughter out of insidious corruption’ Guardian ‘Simon Nye’s witty translation updates and relocates the play suitably close to contemporary England. Fo is that rare thing, a far-left playwright with a popular, comic touch. And his stinging attack upon the black arts of government cover-up, manipulation and mendacity could not be more timely’ Evening Standard In its first two years of production, Dario Fo’s controversial farce, Accidental Death of an Anarchist, was seen by over half a million people. It has since been performed all over the world and is widely recognised as a classic of modern drama. A sharp and hilarious satire on political corruption, it concerns the case of an anarchist railway worker who, in 1969, ‘fell’ to his death from a police headquarters window. This version of the play was premiered at the Donmar Warehouse, London, in February 2003. Commentary and notes by Joseph Farrell.