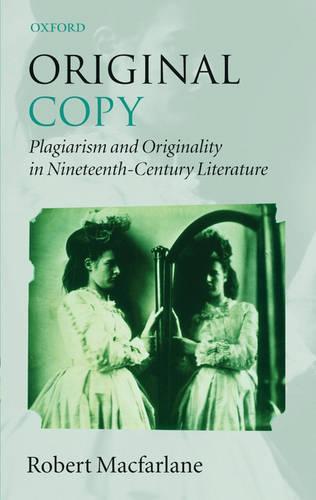 ‘ Originality is only plagiarizing from a great many’, remarked Rupert Brooke, stealing the line from Voltaire. Questions of originality, and accusations of plagiarism, are as old as literature, but different literary cultures have interpreted the relationship between originality and plagiarism in startlingly dissimilar ways.Original Copy investigates and documents the drastic reappraisal of literary originality and plagiarism which occurred over the course of the nineteenth century: from the heroic visions of original authorship that characterised the 1820s and 1830s, through to the stickle-brick creativity of Oscar Wilde and Lionel Johnson at the century’s end. It reveals how ideas of originality and plagiarism were not only a theoretical concern of Victorian commentators on literature, but also provided many important Victorian writers - Eliot, Dickens, Reade, Pater, Wilde, and Lionel Johnson among them - with a creative resource. Moving between numerous different fields of thought and knowledge - literary criticism, the history of science, manuscript culture, anthropology - and written in a supple and elegant style, this book shows that the ideas of originality and plagiarism were the subjects of nineteenth-century literature, as well as what it was subject to.