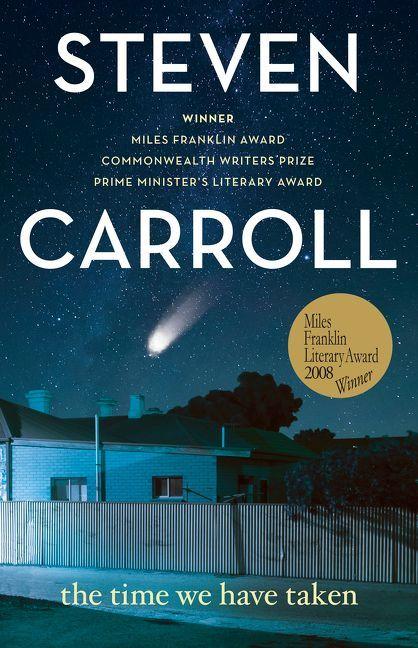 That exotic tribe was us. And the time we have taken, our moment.
One summer morning in 1970, Peter van Rijn, proprietor of a television and wireless shop, pronounces his Melbourne suburb one hundred years old. That same morning, Rita is awakened by a dream of her husband, yet it is years since Vic moved north. Their son, Michael, has left for the city, and is entering the awkward terrain of first love. As the suburb prepares to celebrate progress, Michael’s friend Mulligan is commissioned to paint a mural of the area’s history. But what vision of the past will his painting reveal?
Meanwhile, Rita’s sometime friend Mrs Webster confronts the mystery of her husband’s death. And Michael discovers that innocence can only be sustained for so long. The Time We Have Taken is both a meditation on the rhythms of suburban life and a luminous exploration of public and private reckoning during a time of radical change.

If you’ve read the The Art of the Engine Driver and The Gift of Speed you will no doubt be eagerly awaiting this third instalment of Steven Carroll’s exploration of frontier suburbia. The Time We Have Taken will not disappoint you. Carroll’s fictional patch, from the end of WW2 to the verge of the Whitlam revolution, is also a period much beloved by conservative pollies – the white fencing picket is a weapon of choice for beating disconnected urban latte drinkers over the head.

While Carroll’s work is not overtly political, memory and the mythologising of the past are central themes, and he subtly but surely undermines the simplistic pre-lapsarian dream of the culture warriors while at the same time drawing his characters and their desires for escape or transcendence with humour, affection and empathy – and without a hint of condescension.

Carroll has skilfully maintained continuity and freshness across the trilogy, and with each book has become a more sophisticated writer, both in terms of his insight into human experience and in his craft. While The Time We Have Taken can stand alone, do yourself a favour and read this trilogy in sequence – it’s is a wonderful achievement and a rare pleasure.

A luminous exploration of public and private reckoning in a Melbourne suburb during the upheavals of the 1970s. It is a celebration of the rhythms and the intricacies of suburban life, as well as a meditation on its limits.