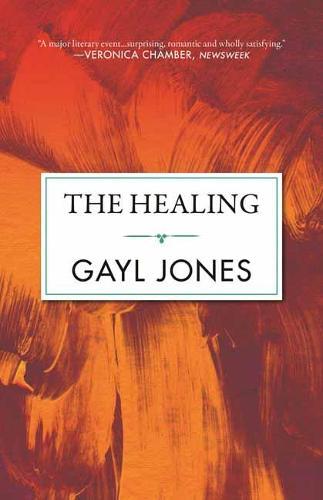 Gayl Jones’s special gift is to shape experience and make it seem unshaped. -John Alfred Avant, The New Republic Gayl Jones’s first novel, Corregidora, won her recognition as a writer whose work was gripping, subtle, and sure. It was praised, along with her second novel, Eva’s Man, by writers and critics from all over the nation- John Updike, Maya Angelou, John Edgar Wideman, and James Baldwin, to name a few. The publication of The Healing, her first novel in over twenty years, is a literary event. Harlan Jane Eagleton is a faith healer, traveling by bus to small towns, converting skeptics, restoring minds and bodies. But before that she was a minor rock star’s manager, and before that a beautician. She’s had a fling with her rock star’s ex-husband and an Afro-German horse dealer; along the way she’s somehow lost her own husband, a medical anthropologist now traveling with a medicine woman in Africa. Harlan tells her story from the end backwards, drawing us constantly deeper into her world and the mystery at the heart of her tale-the story of her first healing. The Healing is a lyrical and at times humorous exploration of the struggle to let go of pain, anger, and even love. Slipping seamlessly back through Harlan’s memories in a language rich with the textured cadences of the black Southerner, Gayl Jones weaves her story to its dramatic-and unexpected-beginning.