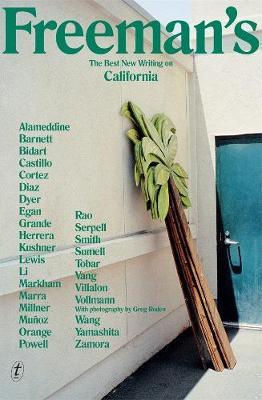 The sixth volume in the series that has been hailed by NPR, O Magazine and Vogue, Freeman’s- California features stunning new work from a broad selection of writers, revealing everything that is most important, most fascinating and most revealing about the populous and precarious state.
Lauren Markham describes how four generations of her family have lived in and tried to manipulate the water in one of the driest parts of the state, and how water and land means everything. Rabih Alameddine recounts becoming a bartender in the mid-1980s as his friends began to die of AIDS. Rachel Kushner reminisces about all the amazing cars she’s owned and their peculiar, vivid personalities. Natalie Diaz narrates the process of making her body into a professional basketball player, and how that assembly stalled some of the internal vulnerabilities she’d feel as a gay native woman growing up where she did. And Elaine Castillo goes to visit her brother in prison.
Also featuring a haunting ghost story from Oscar Villalon, bold new fiction from Tommy Orange, and stunning poems from Mai Der Vang, Juan Felipe Herrera, Maggie Millner and more-Freeman’s- California assembles a diverse list of brilliant writers.
$32.99Add to basket ›