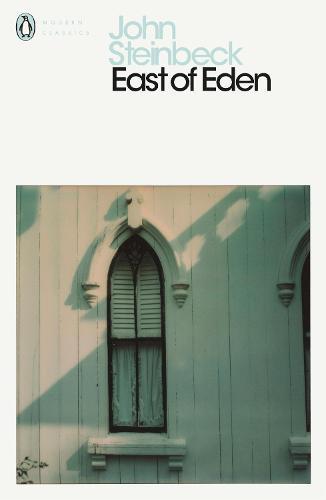 An epic allegorical novel chronicling the fortunes of two families as they try to escape the sins of their forbears, the Penguin Modern Classics edition of John Steinbeck’s East of Eden is introduced by David Wyatt. ‘There is only one book to a man,’ Steinbeck wrote of East of Eden , his most ambitious novel.
Set in the rich farmland of the Salinas Valley, California, this powerful, often brutal novel, follows the intertwined destinies of two families - the Trasks and the Hamiltons - whose generations hopelessly re-enact the fall of Adam and Eve and the poisonous rivalry of Cain and Abel.
Here Steinbeck created some of his most memorable characters and explored his most enduring themes: the mystery of identity; the inexplicability of love, and the murderous consequences of love’s absence.
John Steinbeck (1902-68), winner of the Pulitzer Prize and the Nobel Prize for literature, is remembered as one of the greatest and best-loved American writers of the twentieth century. During the Second World War Steinbeck served as a war correspondent, his journalism later collected in Once There Was a War (1958), and he was awarded the Norwegian Cross of Freedom for his portrayal in The Moon is Down (1942) of Resistance efforts in northern Europe. His best-known works include the epics The Grapes of Wrath (1939) and East of Eden (1952), and his tragic novella Of Mice and Men (1937). John Steinbeck’s complete works are published in Penguin Modern Classics .
$19.99Add to basket ›