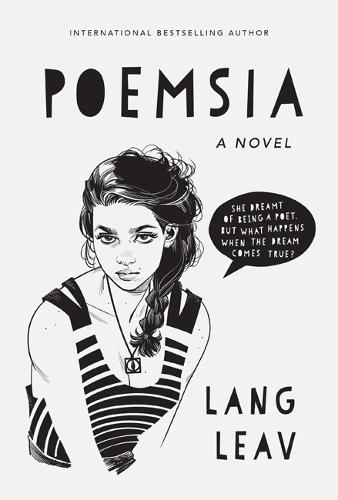 Verity Wolf dreams of being a poet - not that she’d ever admit it to anyone. Her best friend Jess thinks she’s definitely got what it takes, while her cat, Zorro is characteristically indifferent. As for the cute boy she’s just met, he’s about to discover her best kept secret.
When Verity stumbles on an old, mysterious book, Poemsia, she finds herself suddenly thrust into the dizzying world of social media stardom, where poets are the new rock stars and fame is sometimes just a click away.
International bestselling author, Lang Leav takes you into the shadowy world of contemporary poetry in this revealing and emotionally charged story about friendship, first love, betrayal, and the courage to follow your dreams.

The second novel by Lang Leav, best known as an Instagram poet, follows the path of a young poet who finds fame when her best friend encourages her to post her words online. The main character, Verity Wolf, lives above a second-hand bookshop run and owned by her grandfather. When she posts a poem from an old book she finds at the bookshop, people mistakenly assume it is hers, which leads to an online backlash. There’s also a cute boy who helps out at the bookshop; his jealous ex, who happens to be both a wealthy orphan and an online poetry reviewer; and a star of the poetry scene, who appears to be endorsing Verity but may also have her own motives. At the heart of the story is the strong friendship between Verity and her best friend, who always supports her, even when Verity becomes briefly enamoured with celebrity. This is a world where online poets are like rock stars and their youth is part of the appeal.

The writing is not as lyrical as one would have hoped from a poet, but the characters are well defined and there is an overall innocence about the main character that doesn’t become tarnished despite online and verbal bullying.

This book will appeal to teens and adults who are intrigued by the world of the Insta-poets and want to read more about them, and those who like romance. Suitable for readers aged 15+.