Stonehenge for the Ancestors: Part 1: Landscape and Monuments 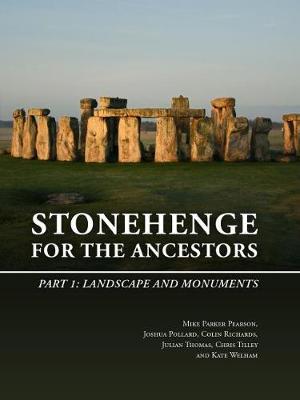 Stonehenge for the Ancestors: Part 1: Landscape and Monuments

For many centuries, scholars and enthusiasts have been fascinated by Stonehenge, the world’s most famous stone circle. In 2003 a team of archaeologists commenced a long-term fieldwork project for the first time in decades. The Stonehenge Riverside Project (2003-2009) aimed to investigate the purpose of this unique prehistoric monument by considering it within its wider archaeological context. This is the first of four volumes which present the results of that campaign. It includes investigations of the monuments and landscape that pre-dated Stonehenge on Salisbury Plain as well as of excavation at Stonehenge itself. The main discovery at Stonehenge was of cremated human remains from many individuals, allowing their demography, health and dating to be established. With a revised radiocarbon-dated chronology for Stonehenge’s five stages of construction, these burials can now be considered within the context of the monument’s development. The different types of stone from which Stonehenge is formed - bluestones from Wales and sarsen silcretes from more local sources - are investigated both at Stonehenge and in its surroundings. These surrounding monuments include single standing stones, the Cuckoo Stone and the Tor Stone, as well as the newly discovered circle of Bluestonehenge at West Amesbury beside the River Avon. The ceremonial Stonehenge Avenue, linking Stonehenge to Bluestonehenge, is also included, based on a series of excavations along its length. The working hypothesis behind the Stonehenge Riverside Project links Stonehenge with a complex of timber monuments upstream at the great henge of Durrington Walls and neighbouring Woodhenge. Whilst these other sites are covered in a later volume (Volume 3), this volume explores the role of the River Avon and its topographic and environmental evidence. With contributions by: Umberto Albarella, Michael Allen, Olaf Bayer, Wayne Bennett, Richard Bevins, Christopher Bronk Ramsey, Chris Casswell, Andrew Chamberlain, Benjamin Chan, Rosamund Cleal, Gordon Cook, Glyn Davies, David Field, Charles French, Robert Ixer, Neil Linford, Peter Marshall, Louise Martin, Claudia Minniti, Doug Mitcham, Bob Nunn, Andy Payne, Mike Pitts, Rebecca Pullen, Julian Richards, David Robinson, Clive Ruggles, Jim Rylatt, Rob Scaife, Ellen Simmons, Charlene Steele, James Sugrue, Anne Teather, Sarah Viner, Tony Waldron, Katy Whitaker and Christie Willis