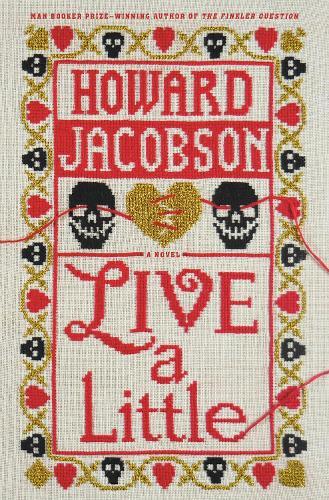 From Man Booker Prize-winning author of The Finkler Question and J, and one of ‘our funniest writers alive’ (Allison Pearson): a wickedly observed novel of old age and new love. At the age of ninety-something, Beryl Dusinbery is forgetting everything - including her own children. She spends her days stitching morbid samplers and tormenting her two long-suffering carers, Nastya and Euphoria, with tangled stories of her husbands and love affairs. Shimi Carmelli can do up his own buttons, walks without the aid of a frame and speaks without spitting. Among the widows of North London, he’s whispered about as the last of the eligible bachelors. Unlike Beryl, he forgets nothing - especially not the shame of a childhood incident that has hung over him ever since. There’s very little life remaining for either of them, but perhaps just enough to heal some of the hurt inflicted along the way, and find new meaning in what’s left. Told with Jacobson’s trademark wit and style, Live a Little is equal parts funny, irreverent and tender - a novel to make you consider all the paths not taken, and whether you could still change course. Advance praise for Live a Little One of the great comic geniuses of our time. –Lit Hub A tender story of unlikely love … Jacobson treats with compassion the dilemma of old age… . Wise, witty, and deftly crafted. –Kirkus Reviews (starred review) For all of its moments of bleakness, and the occasional flicker of genuine terror, it’s rarely less than bitterly funny in its determination to face up to the obliteration that awaits us all. –The Guardian What a relief to come on a novel which invites you to smile and even laugh. –The Scotsman The novel’s brilliant cover tells it all: hearts and skulls, love and death. –The Jewish Chronicle A thoroughly enjoyable read. For a literature snob and a language obsessive … there is a lot to feast on … for someone looking for an emotionally honest storyline, the book also delivers. Live a Little is about growing old, but it’s also about gender, race, love and politics. –Independent Tender and funny. –Grazia