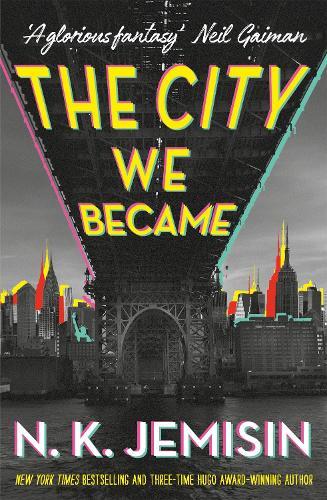 Five New Yorkers must band together to defend their city in the first book of a stunning new series by Hugo award-winning and New York Times bestselling author N. K. Jemisin.
Every city has a soul. Some are as ancient as myths, and others are as new and destructive as children. New York City? She’s got five.
But every city also has a dark side. A roiling, ancient evil stirs beneath the earth, threatening to destroy the city and her five protectors unless they can come together and stop it once and for all.

The idea that places or cities might have their own unique personalities or ‘souls’ is a theme with a long history, stretching as far back as the Ancient Roman notion of ‘genius loci’. Many urban fantasy writers have created marvellous personifications of the cities they love – for in-stance, the alternative visions of London offered up by Ben Aaronovitch’s Rivers of London series, or Neil Gaiman’s Neverwhere.

N.K. Jemisin takes this well-established theme and runs energetically away with it, casting New York and its boroughs as the main characters in a multidimensional drama. In this story, cities are ‘born’ into a kind of sentience once they reach a critical mass of history and culture, then take on human avatars. The birth of a city is a dangerous time, when that city and its inhabitants are vulnerable to attack by extradimensional predators.

The true existential threats to a vibrant and diverse city like New York are real-world problems such as racism, gentrification, corporate overreach, police violence, bland homogeneity – all embodied by the unsettling Woman In White and her reality-bending assault on the boroughs of New York. Jemisin takes the Lovecraft mythos so ubiquitous in her chosen genre and confidently stands it on its head: here, diversity is strength and monoculture is toxic. Starbucks shopfronts become literal ravening beasts; white-supremacist YouTube agitators mass in violent frenzies. Against such enemies, intense localness becomes the strongest form of resistance: the resourceful spirit of Manhattan rides a yellow taxicab into battle like a warhorse; Brooklyn fights off encroaching cosmic horrors with weaponised freestyle rap. This story is an energetic ride: part gleeful love-letter to New York, part reprimand against big-city fear and intolerance. I heartily recommend this big defiant shout of a book.

END_OF_DOCUMENT_TOKEN_TO_BE_REPLACED

Master of the Revels

A History of What Comes Next: The captivating speculative fiction for fans of The Man in the High Castle

The Galaxy, and the Ground Within (Wayfarers, Book 4)

The Trials of Koli: The Rampart Trilogy, Book 2