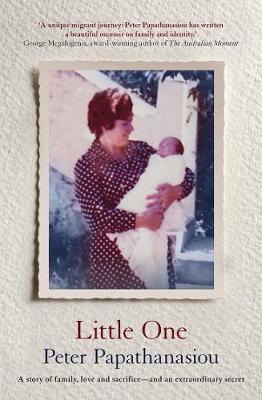 Peter Papathanasiou is the son of migrants and grandson of refugees. His parents emigrated from Greece to Australia in 1956 but wereunable to have children, a huge sorrow - and shame - for them among Australia’s Greek community and their own family. Finally, in 1973,Peter’s uncle and aunt in Greece offered to have a baby and give it tohis parents to raise as their own in Australia. Peter was that baby, bornin 1974 and given up by his biological parents so that a childless sistercould become a mother.
Peter grew up an only child in Australia, finally discovering his true parentage in 1999 when his mother revealed the secret of his birth and the sacrifice that lay behind. By then, Peter’s birth mother had died,but he found he had two older brothers still living in northern Greece. This is where the story begins.
What follows is a moving and compelling memoir of family and place, as Peter traces his parents' journey to Australia, their struggle as migrants, and the very different world that they came from - a world where the bond of family was so strong, a husband and wife were prepared to make an extraordinary gift.