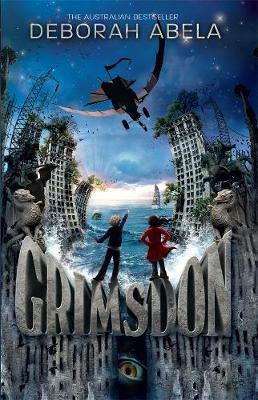 Bestselling author Deborah Abela brings us a heroine to love and a great deal of danger to overcome in this thrilling novel set in a post-apocalyptic, flooded world. Grimsdon is in ruins. Three years ago a massive wave broke its barriers and the sea flooded this grand city. Most were saved, some were lost - and some were left behind. Isabella Charm and her best friend, Griffin, live with three other children in the top of an opulent mansion. They’ve survived with the help of Griffin’s brilliant inventions, Isabella’s fighting skills and their vow to look after each other. But what will happen when a newcomer arrives in his flying machine? Grimsdon is full of hidden perils, from bounty hunters to sneaker waves. Could Xavier’s daredevil risks put all their lives in danger?