Australian Foreign Affairs, Issue 6: Our Sphere of Influence: Rivalry in the Pacific 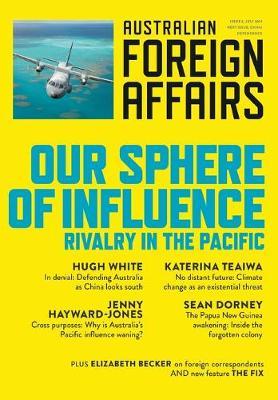 Australian Foreign Affairs, Issue 6: Our Sphere of Influence: Rivalry in the Pacific

The sixth issue of Australian Foreign Affairs examines Australia’s struggle to retain influence among its Pacific island neighbours as foreign powers play a greater role and as small nations brace for the impacts of climate change.
Our Sphere of Influence explores the security challenges facing nations in the southern Pacific and whether Australia will need new approaches to secure its relations and interests. Hugh White argues that Australia will be unable to keep China out of the Pacific and must urgently renew its defences. Jenny Hayward-Jones examines whether Scott Morrison’s Pacific  step-up  can reverse Canberra’s declining diplomatic influence. Katerina Teaiwa explores how Australia’s climate change policy undermines ties with its island neighbours. Sean Dorney reports from inside the forgotten Australian colony of Papua New Guinea. Euan Graham proposes how to address Australia’s knowledge gaps about the Chinese leadership and military. Elizabeth Becker reflects on the unique challenges for female foreign correspondents.
PLUS Correspondence on AFA5 – Are We Asian Yet? from Clive Hamilton, Barry Li and Linda Jaivin.
$22.99Add to basket ›