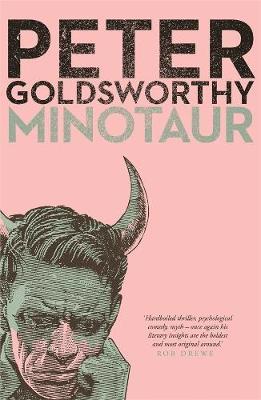 Peter Goldsworthy’s new novel features a blind detective determined to deliver justice to the man who shot him, even though his failed assassin has broken out of jail and is equally determined to finish the job. Cleverly structured around the five senses, and with the action confined to one week, it’s pacey and taut, with the cat-and-mouse tension leavened by lighter interludes.
Goldsworthy is interested in all that his protagonist cannot see, as he is forced to meet evil, acting on a trust in his senses, and the ineluctable mystery that is memory.

‘Minotaur (def) – Trapped in a labyrinth, he is a symbol of power and a tool for death and torture.’ This gritty, action-packed cop drama unfolds as we see our hero at his lowest point. Rick Zadow, angry, tattooed, separated from his wife, drives a Ducati motorbike – well, he used to. He’s now blind due to a mishandled hostage situation. He’s hankering for revenge. And he’s a cop.

This tale of revenge by both sides is at once action packed, ridiculous and an absolute hoot. What a ride! Peter Goldsworthy, author of the hugely entertaining schlock classics Honk If You’re Jesus, Maestro and Three Dog Night comes away again with a hugely entertaining rollercoaster of a story. I had an absolute blast reading this tale of two guys out for revenge in the most unclassy ways possible.

The characters are a who’s who of Aussie cop shows from times past. His ex-wife, the margarita-drinking nurse. His best mate who is also his boss, who may or may not be his enemy. The crim, escaped from jail after a botch-up by the feds, out for revenge against Rick for his incarceration. His dog Scout, who, being in Rick’s care, is at once a character we feel sorry for. The shady tattooist. And Siri. What to do if you’re a pill-popping, beerswilling, dumped, blind ex-cop with a crim on your tail? Well, you build a labyrinth in your home to trap your escaped crim. Simple. What could possibly go wrong?

If you want classic literature, stay away. If you want good old-fashioned fun with a side of suspense then this is your book. You will love it.

Dianna Jarnet is a bookseller at Readings Hawthorn.