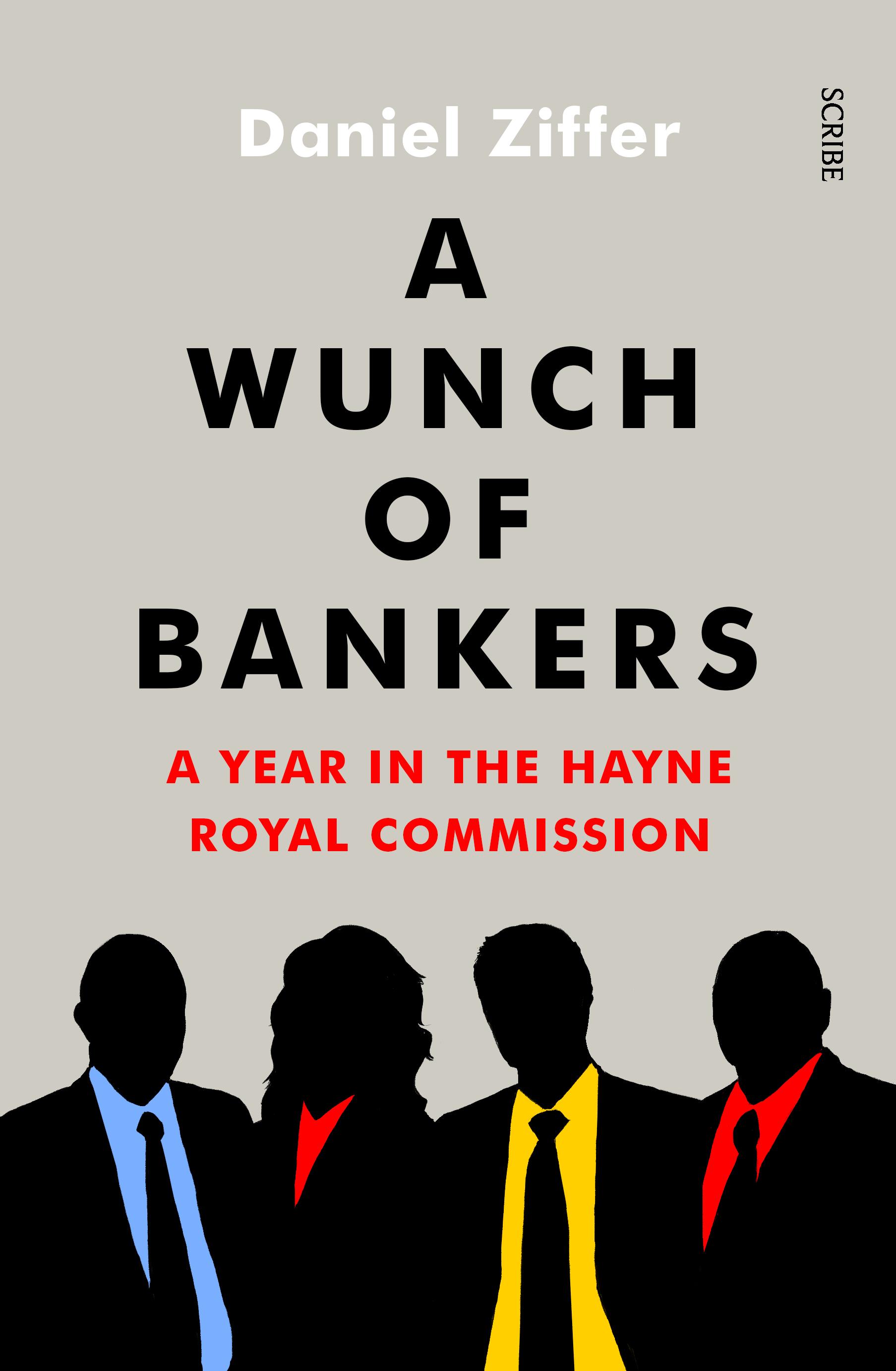 It wasn’t just its exhaustive rounds of hearings around the country – Melbourne, Brisbane, Darwin, and Sydney – on topics from farming finance to financial planning. It wasn’t even the long list of scandals exposed to a horrified nation – charging fees to dead people, blatant conflicts of interest, and taking $1 billion from customers in fees that banks were never entitled to.
What made it so fascinating, so heart-breaking, and so enraging was the procession of faces through the witness box, and the team of counsel gazing into the dark heart of banking.
Tearful victims, blank-faced executives, hapless regulators, and a couple of utter charlatans all had their day in court, watched by an audience of millions, and revealing – in their stories – the material to justify re-shaping the multi-trillion dollar financial services industry that forms a pillar of Australian life.
A Wunch of Bankers covers not just the big shocks, but the small moments – lost in the flurry of daily reporting – that reveal how companies have used the law, limp enforcement, and basic human behaviour to take advantage of customers.
Is there a phrase that judges how much life-insurance spruikers in call centres can terrify you about your impending death – and the grief-stricken ruins of an estate you’ll leave for your bereaved family – while still being legal?
Yes, there is.
Was there a meeting in which a bank’s executives ignored a warning of “Extreme” from its chief risk officer, to embark on an illegal scheme that accrued $3.6 billion in funds?
There was.
Mixed among the testimony are snippets from life on the road as the World’s Oldest Debuting TV Reporter – not just driving five hours one-way to talk to a man who almost blew his brains out over a bank nabbing his $22 million estate, but explaining how journalism can only ever give you a glimpse inside complex issues.
In A Wunch of Bankers, Danel Ziffer bring out the colour and grit of the royal commission’s proceedings, and explores broader issues raised by the testimony. A mixture of analysis, reportage, and observations, it is densely researched and compellingly written.

You can thank the Trump administration for the rebirth and soaring popularity of the behind-the-scenes political hatchet job. From Bob Woodward’s artful Fear to Michael Wolff’s tawdry Fire and Fury, the public can’t get enough of watching the guilty powerful try to squirm out of trouble and embarrass themselves while doing it.

ABC reporter Daniel Ziffer’s rollicking blow-by-blow of the Hayne Royal Commission into banking is a welcome addition to the genre. Instead of one megalomaniac and his contemptible minions, we are presented with an Hieronymus Bosch-like cast of thousands. The scale of the banks’ ‘bastardry’, as Ziffer puts it, is jaw-dropping.

The subject matter lends itself to Machiavellian courtroom drama. Ziffer delights in transcribing sweating bank chiefs uncomfortably tightening their own nooses while an incredulous Commissioner Hayne and the inscrutable QC Rowena Orr calmly feed them the rope. There are ‘gotcha’ moments galore, and it’s barely enough.

But beyond the gleeful depiction of some very rich people caught in compromising positions – I’m not above schadenfreude, and neither are you, my friend – Ziffer’s book draws attention to a serious problem we have on our hands.Australians have more household debt than almost any other nation. Bankers controlling trillions of dollars are more than happy to let us take on more. But an ABS survey found that a whopping fifty per cent of the adult population is not literate or numerate enough to meet the demands of everyday life, such as reading maps and payroll forms.

Ziffer’s book recounts sunlight falling on some of the labyrinthine financial traps set to ensnare many of these fifty-percenters. Some of the personal accounts included here of financial hardship experienced by the most vulnerable make for chokingly difficult reading.