Prophets of Recognition: Idelogy and the Individual in Novels by Ralph Ellison, Toni Morrison, Saul Bellow, and Eudora Welty 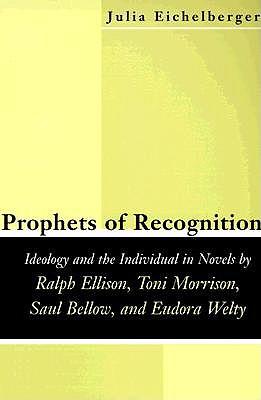 Prophets of Recognition: Idelogy and the Individual in Novels by Ralph Ellison, Toni Morrison, Saul Bellow, and Eudora Welty

An arresting comparative analysis, Prophets of Recognition invites readers to consider four well-known post-World War II American novels, Ralph Ellison’s Invisible Man, Toni Morrison’s The Bluest Eye, Saul Bellow’s Seize the Day, and Eudora Welty’s The Optimist’s Daughter, from a different perspective. Julia Eichelberger argues that although these writers are quite diverse and thus usually assigned to separate categories, they share a common conception of the individual’s relationship to modern American society. The four novels examined here represent very different experiences, but in all of them individuals seek a place within a public world. Eichelberger posits that each novel demonstrates a view of the individual she terms suspicious humanism, a philosophy that acknowledges the power of individuals to resist dehumanizing cultural beliefs and to recognise the innate value of human beings. Using the word recognition to identify this ideal form of democracy, she maintains that each novel at least implicitly champions recognition. In its application of critical theory to an interpretative analysis of these contemporary novels, Prophets of Recognition is a stimulating and enlightening discussion of the relations between the individual and society. Ultimately, this study’s valuable contributions to literary scholarship will include not only its critical insights into the novels at hand but also its universal relevance to other American fiction of this period.