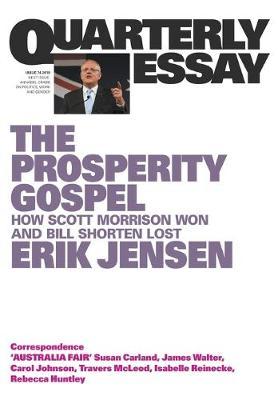 What went wrong for Labor and how did Scott Morrison achieve his remarkable victory? In this dazzling report from the campaign trail, Erik Jensen homes in on the insecurities that drive Bill Shorten and the certainties that helped Scott Morrison win. He considers how each man reflects, challenges and comforts the national character.

Who are Morrison’s “quiet Australians”? What did Shorten Labor fail to see? And will fear always trump
hope in politics? The Prosperity Gospel sheds new light on the politics of a divided nation.

“Arthur Sinodinos says the election is a crapshoot. He’s in a car park in Nowra, waiting for Morrison. ‘The momentum has been with us at different times, especially in Queensland,‘ he says. ‘Central Queensland, even the outer suburbs of Brisbane. It’s a narrow pathway to victory, with the odds going the other way. But it ain’t over until it’s over.’ Despite everything, Arthur Sinodinos has an honest face. He does not look confident.”
– Erik Jensen, The Prosperity Gospel
$22.99Add to basket ›