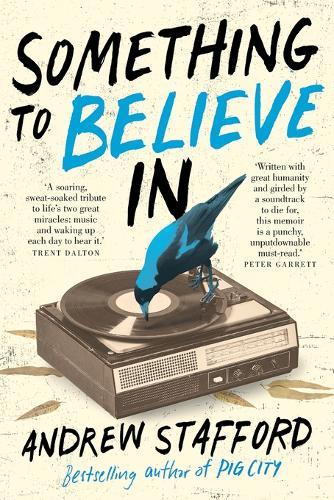 For Andrew Stafford, music was a way up and a way out. There was just one little problem: he couldn’t play. Because those who can do and those who can’t review, he carved out a niche writing about it instead.
This is the story of a self-confessed wannabe’s life: of growing up in public, of family, of falling in and out of love, and music, sweet music, everywhere.
Written with enormous heart and a thumping rhythm, Something To Believe In is an uncompromising, inspiring book for anyone whose life has been saved by rock & roll.

Something To Believe In is a memoir of music, madness and love, all wrapped in one beautifully written book. Andrew Stafford’s first book, Pig City, was both a history of the Brisbane music scene as well as a look at the corruption and tumult during the time of the Bjelke-Petersen government in Queensland.

The introduction gives the reader the immediate sense of what’s to come, which is basically a warts-and-all memoir of a very talented writer who happens to suffer from depression. It begins with an aborted suicide attempt in New Zealand, which was ultimately unsuccessful due to the writer’s impending deadline for a review of the new Neil Finn album which he felt obliged to finish. It is both unbelievable and vividly real at the same time.

The memoir takes the reader from Stafford’s days in the eastern suburbs of Melbourne as an awkward, quiet teenager who loved birds, to his family’s move to Brisbane, and the slow beginning of his love affair with music. Like many, he had no real idea of what to do at the end of his schooling and he fell into music journalism. Stafford skillfully takes us on a musical journey of his life. The chapters are themed around a particular song or album or artist. Like me, many of Stafford’s early musical influences came from watching Countdown, but before long he veers into a much less safe musical path.

The honesty with which he writes about his parents, their relationship breakdown and particularly his mother’s decline into dementia, is very tender. He also writes very candidly about his own difficult relationships and personal mental health issues.

Even though this book is a memoir, fans of Nick Hornby’s High Fidelity will find much to like here. As an added extra, at the end of the book he has devised a handy playlist for people wanting to follow on his musical path or maybe just discover a new artist for themselves. Highly recommended.