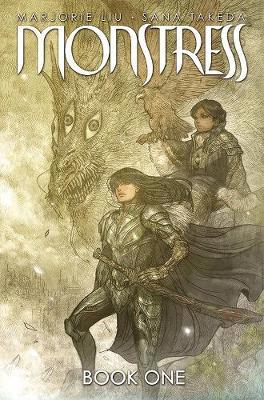 The richly imagined world of  MONSTRESS is an alternate matriarchal 1900s Asia, with an art deco-infused  steampunk aesthetic that’s brimming with arcane dangers. Within it, a teenage girl struggles to overcome the trauma of war, a task that’s made all the more difficult by her mysterious psychic link to an eldritch monster of tremendous  power - a connection that will transform them both, and place them in the crosshairs of both human and otherworldly powers.
Creator/writer Marjorie Liu (who made  history as the first woman to win an Eisner Award for Best Writer) and  creator/artist Sana Takeda present a deluxe, oversized hardcover edition of  their beloved breakout comic in MONSTRESS BOOK ONE.
Collecting the first 18  issues of the New York Times bestselling series, this massive edition features a  striking new cover, as well as special extras, including never-before-seen  sketches, script pages, and more for over 500 pages of award-winning content.
$116.95Add to basket ›