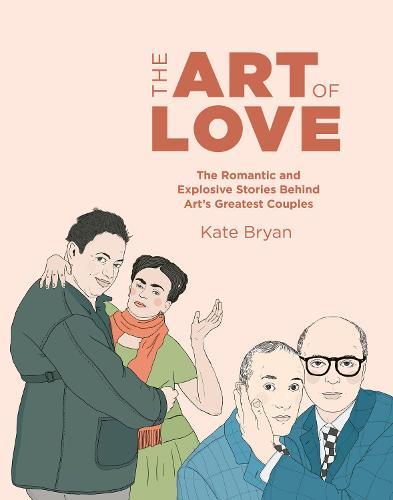 The Art of Love tells the stories of 35 famous couples from the art world, exploring the variously passionate, tender, challenging, loving and tragic relationships that led to some of the world’s most famous artworks.
Together, Lee Miller and Man Ray discovered solarisation (a pioneering photographic technique), and had it not been for the dramatic breakdown of their relationship, Man Ray would never have produced his most famous artworks: Observatory Time - the Lovers among them. In contrast, Christo and Jeanne-Claude - both born on the same day - would spend almost fifty years (from their meeting in 1958 through to Christo’s death in 2009) working together as husband and wife to produce art installations on a scale never seen before. And we all know the story of Frida Kahlo and Diego Rivera, in which Kahlo struggled against her relegation to mere ‘artist’s wife’, and in which multiple affairs on both their parts led to divorce and then eventual re-marriage. Whether long-lasting, peaceful collaborations, or short-lived tumultuous affairs, each story demonstrates the power of romance in art and opens the door on some of the greatest love stories of the twentieth century.
Camille Claudel & Auguste Rodin Marina Abramovi? and Ulay Gilbert & George Man Ray and Lee Miller Christo and Jeanne-Claude Ily and Emilia Kabakov Frida Kahlo & Diego Rivera Alfred Stieglitz & Georgia O'Keeffe Jasper Johns & Robert Rauschenberg Vitaly Komar and Alexander Melamid Elaine Marie Fried and Willem De Kooning Wassily Kandinsky and Gabriele Münter Jackson Pollock and Lee Krasner Saul Steinberg and Hedda Sterne Robert and Sonia Delaunay Robert Motherwell & Helen Frankenthaler Jean Arp & Sophie T Taeuber-Arp Anni & Josef Albers Barbara Hepworth & Ben Nicholson Varvara Stepanova and Alexander Rodchenko Picasso et. Al Emilie Flöge and Gustav Klimt Maria Martins and Marcel Duchamp Yin Xiuzhen and Song Dong Antony Gormley and Vicky Parsons
$17.99Add to basket ›

We Used to Talk about Love: Balnaves Contemporary - Photomedia