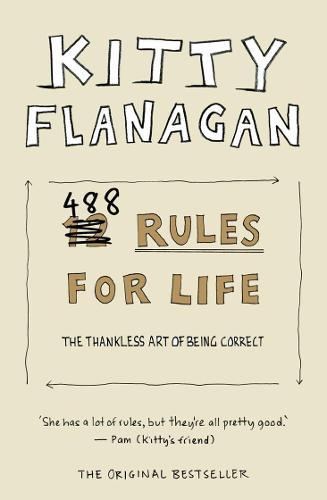 Kitty Flanagan is all about giving the people what they want, and it’s become increasingly apparent that people want 488 Rules for Life. Ever since she appeared on the ABC’s The Weekly with her segment about this ‘pretend’ book, she’s been stopped in the street, approached in the supermarket, the cafe, even the dog park by people wanting to know where they could get a copy.
Kitty says:
‘Who knew other people loved rules as much as I do? I’m so excited, this feels like it could be more than a book, it could be a movement, a way of life even! With any luck, we may well see someone from the 488 Rules Party standing at the next election. However, let’s be clear about one thing, it won’t be me:
Rule no. 242 - Comedians should not be Prime Minister. Nor should Shannon Noel. Or any other actor or celebrity who just so happens to say something with which you agree.
488 Rules is a book for anyone who believes good manners and common sense are the way forward. It’s time to make the world idiot-free and lovely.’
$29.99Add to basket ›

The Boy, The Mole, The Fox and The Horse

The History of Philosophy

Books for people who ‘don’t read’

END_OF_DOCUMENT_TOKEN_TO_BE_REPLACED

The Boy, The Mole, The Fox and The Horse

An Underground Guide to Sewers