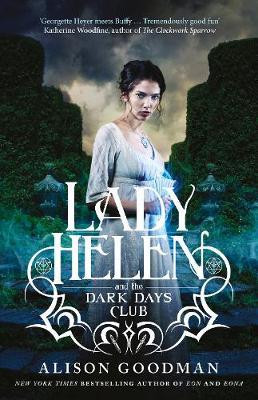 Bridgerton meets Buffy the Vampire Slayer in the seductive series by award-winning author Alison Goodman London, April 1812. Lady Helen Wrexhall is about to make her debut at the court of Queen Charlotte and officially step into Regency society and the business of marriage. But Helen is about to discover that beyond the glittering ballrooms of Mayfair is a shadowy world of strange powers, missing housemaids and demonic conspiracies. Standing between those two worlds is Lord Carlston, a man of ruined reputation and curt manners. He believes Helen has a destiny beyond the ballroom; a sacred and secret duty. Helen is not so sure, especially when she realises that nothing around her is quite as it seems, including the mysterious Lord Carlston. Set against a backdrop of whispered secrets in St James’s Palace, soirees with Lord Byron and morning calls from Beau Brummell, Lady Helen and the Dark Days Club is a delightfully dangerous adventure of self-discovery and the dark choices that must be made … whatever the cost. A tantalising trilogy set in Regency London from the award-winning author of Eon and Eona. PRAISE FOR THE LADY HELEN SERIES ‘I LOVED this book! It’s a page-turner from start to finish’ – Amazon review ‘A delicious collision of Regency romance and dark fantasy’ – Publishers Weekly starred review ‘A mesmerizing marriage between Regency romance and urban fantasy that is both impeccably researched and wonderfully paced. I devoured this series’ – Sabaa Tahir, author of the bestselling An Ember in the Ashes series ‘Brilliant! Enthralling mix of history and fancy – it’s Downton Abbey meets Buffy!’ – Amazon review ‘Amazing research, really fun characters and such an original idea’ – Goodreads review AWARDS FOR THE LADY HELEN SERIES Lady Helen and the Dark Days Club (Book 1) Notable Book – 2017 Children’s Book Council of Australia Awards Lady Helen and the Dark Days Pact (Book 2) Winner – 2016 Aurealis Awards, Best Young Adult Novel Lady Helen and the Dark Days Deceit (Book 3) Shortlisted – 2018 Aurealis Awards, Best Young Adult Novel AWARDS FOR EON Winner – 2008 Aurealis Awards, Best Fantasy Novel Honour Book – 2008 James Tiptree Award (UK) Notable Book – 2009 Children’s Book Council of Australia Awards Shortlisted – 2009 NSW Premier’s Literary Awards, 2009 Victorian Premier’s Literary Awards, 2008 Western Australian Premier’s Literary Awards