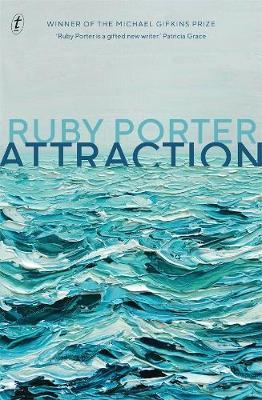 Winner of the Michael Gifkins Prize, 2018
The present reckons with the past in Attraction, Ruby Porter’s atmospheric debut novel.
Three women are on a road trip, navigating the motorways of the North Island, their relationships with one another and New Zealand’s colonial history. Our narrator doesn’t know where she stands with Ilana, her not-quite girlfriend. She has a complex history with her best friend, Ashi. She’s haunted by the memory of her emotionally abusive ex-boyfriend. And her period’s now weeks late.
Attraction is a meditative novel of connection, inheritance and the stories we tell ourselves. In lyrical fragments, Porter explores what it means to be and to belong, to create and to destroy.

‘My earliest memories don’t come in images, but in thoughts,’ says the unnamed narrator early on in Attraction, the debut novel from New Zealand writer Ruby Porter, and it reads as an almost anti-manifesto for the book that unfolds. Attraction is a novel told mostly in images, with a narrator attempting to leave her past behind. ‘Do you know every time you remember something you’re only remembering the last time you thought of it?’ she says later.

But of course the past cannot be escaped. As three young women¥– the unnamed narrator, her new girlfriend Ilana and her friend Ashi – make their way along the roads of New Zealand’s North Island, we are given a novel in sections made up of the journey itself, interspersed with parts of the narrator’s upbringing, her home life and her relationship with her emotionally abusive ex-boyfriend Nick.

At times these sections are a few pages long, other times whittled down to just a few sentences: ‘There’s always the point on a road trip when you think something’s sparked, a wild fire. Smoke growing like mildew on the horizon. But it’s always a foundry, a town centre you weren’t expecting yet.’

Attraction is filled with near-dystopian descriptions of the landscape: their car emerging from a forest into entire fields of cut-down trees, the red and brown dirt everywhere, the narrator flatly declaring that, ‘One day, this will all be under water.’ One of the novel’s strengths is when it links these images of a world we are currently destroying with New Zealand’s troubled history of colonisation.

The winner of the inaugural Michael Gifkins prize, run by Text Publishing for emerging New Zealand writers, Attraction is an assured debut and a promising start to a new writer’s career.