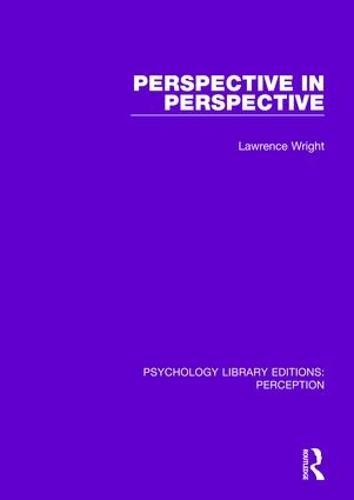 Originally published in 1983, this book is about the way we see things - or think we do, which is by no means the same - and about the ways in which we have tried to reproduce that visual concept in diagrams, pictures, photographs, films and television. Whatever the medium, if any degree of realism is intended, some use of perspective is inevitable, and some understanding of it can aid the appreciation of the result. But here the technicalities of perspective geometry are treated as far as possible non-technically, by a common-sense approach. Students, would-be artists or architects, are warned in the Preface that they will travel second-class in the author’s train of thought (the ‘general reader’ coming first), but they may well find the journey worthwhile in that it provides a background to a subsequent, more detailed studies. Lawrence Wright shows that every form of perspective representation has some innate falsity, but that most such forms offer an adequate makeshift; that rules of geometry often need to be bent; that labour-saving dodges and shortcuts exist. As he says, perspective drawing, like politics, is an art of the possible. In reading this book, beginners may find it all simpler than they had supposed, though the established expert may in some interesting respects find just the opposite. The general reader may thereafter find himself seeing things - and representations of them - in a new light.