Halibut on the Moon 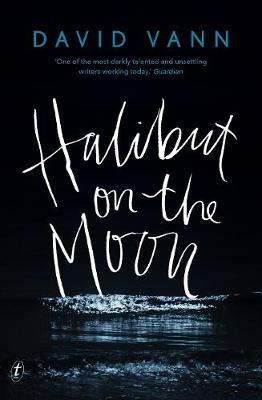 Halibut on the Moon

Middle-aged and deeply depressed, Jim arrives in California from Alaska and surrenders himself to the care of his brother Gary, who intends to watch over him. Swinging unpredictably from manic highs to extreme lows, Jim wanders ghostlike through the remains of his old life, attempting to find meaning in his tattered relationships with family and friends. As sessions with his therapist become increasingly combative and his connections to others seem ever more tenuous, Jim is propelled forwards by his thoughts, which have the potential to lead him, despairingly, to his end.

Halibut on the Moon is a searing exploration of a man held captive by the dark logic of depression struggling to wrench himself free. In vivid and haunting prose, Vann offers us an aching portrait of a mind in peril, searching desperately for some hope of redemption.

In Halibut on the Moon, David Vann revisits a theme that plays out in his staggeringly good debut short-story collection, Legend of A Suicide. Indeed it’s a subject that the author knows intimately: the suicide of his own father. As with the stories in Legend, Vann reimagines his father’s final days. It’s an absolutely riveting read, and I take my hat off to Vann for not just imagining his father’s very troubled mind, but for writing such an arresting and beautifully melancholic testament to him. That’s not to say that Vann holds his father up on a pedestal here. In Halibut, Jim Vann is cruel, self-centred and literally obsessed by his own death. He makes no secret of the fact that he will suicide, and soon.

Jim has flown from his home in Alaska to see his family in San Francisco. He is in debt to the IRS, suffering from chronic sinus pain and recently divorced from his second wife, Rhoda, who is grieving her parents after their murder/suicide (as told in another of Vann’s novels, Caribou Island). Jim is severely depressed. On arrival, he goes to see his therapist. It’s highly recommended that his younger brother Gary is to take charge of Jim, while he waits for the newly prescribed anti-depressants to take effect over the next two weeks. Of course Jim’s moods swing erratically over the next few days while he visits his son (a thirteen-year-old version of the author) and daughter Tracy, and during a fiery confrontation with his parents, Jim gleans a side of his father that he never knew existed.

Halibut is not an ‘up’ novel. In fact it’s quite uncomfortable being in Jim’s company, but that’s the point. There are no prizes for guessing how this story ends, but for its grim subject matter this is the best thing that I have read so far this year.