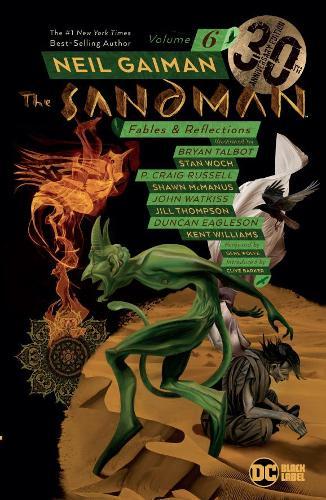 The sixth installment of Neil Gaiman’s seminal, New York Times best-selling series, The Sandman Vol. 6- Fables & Reflections, celebrates its 30th anniversary with an all-new edition, featuring a new cover from artist Dave McKean! From #1 New York Times best-selling author Neil Gaiman! The Sandman Vol. 6- Fables & Reflections 30th Anniversary Edition follows the Lord of the Dreaming on a winding journey through time and space as he touches the lives of nine remarkable dreamers. In these haunting tales, kings and spies, emperors and actors, ravens and werewolves all share their secret stories–dreams of life and love, power and darkness. One of the most popular and critically acclaimed graphic novels of all time, Neil Gaiman’s award-winning masterpiece The Sandman set the standard for mature, lyrical fantasy in the modern comics era. Illustrated by an exemplary selection of the medium’s most gifted artists, the series is a rich blend of modern and ancient mythology in which contemporary fiction, historical drama and legend are seamlessly interwoven. Collects The Sandman #29-31, #38-40, #50, Sandman Special #1 and Vertigo Preview #1.