The Adventures of Jack Scratch: The Quest for the Hiss-Paniola! 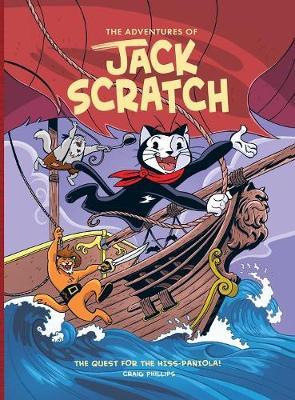 The Adventures of Jack Scratch: The Quest for the Hiss-Paniola!

PIRATES! CURSES! CUTLASSES! Meet Jack Scratch. Pint sized hero. Swashbuckler. Adventurer… and singer of pirate ditties! Together with Cap'n Catnip - The World’s Greatest Mariner - and his Uncle Silver, Jack is about to embark on a quest to find the fabled treasure of the Hiss-paniola! And he’ll encounter a whole lot of trouble along the way. Written and illustrated by Craig Phillips, this is the first in The Adventures of Jack Scratch series of comics about a pirate cat. Craig is bringing the love of comics back to a new generation of children. Recommended for all little adventurers. Several years ago Craig’s daughter asked him to make a book just for her. When he asked her what she’d like it to be about she said cats!, then pirates! and then, pirate-cats! and so Jack Scratch was born and developed over many meal times and deep discussions about all the types of things pirate-cats might get up to. So, if you have a child that likes cats or pirates or pirate-cats, then they will love this book! This is the first book in the series and helps to establish some of the main characters that will carry through in the following books. The second book ‘The Curse of the Kraken!’ is already well under way. A beautifully illustrated hard cover book.