The Death of Democracy 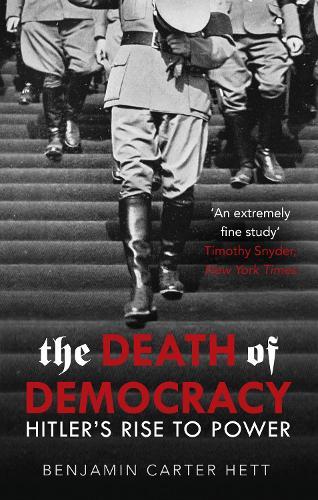 The Death of Democracy

A landmark account of the fall of the Weimar Republic and the rise of Hitler, based on award-winning research, and recently discovered archival material. *A TIMES AND TELEGRAPH BOOK OF THE YEAR* WHAT CAUSED THE FALL OF THE MOST PROGRESSIVE GOVERNMENT IN TWENTIETH-CENTURY EUROPE, AND THE RISE OF THE MOST TERRIFYING? In the 1930s, Germany was at a turning point, with many looking to the Nazi phenomenon as part of widespread resentment towards cosmopolitan liberal democracy and capitalism. This was a global situation that pushed Germany to embrace authoritarianism, nationalism and economic self-sufficiency, kick-starting a revolution founded on new media technologies, and the formidable political and self-promotional skills of its leader. Based on award-winning research and recently discovered archival material, The Death of Democracy is a panoramic new survey of one of the most important periods in modern history, and a book with a resounding message for the world today. ‘Extremely fine… with careful prose and scholarship, he brings these events close to us.’ Timothy Snyder, The New York Times ‘Intelligent, well-informed… intriguing.’ The Times ‘With the injection of fresh contemporary voices, The Death of Democracy is also a thoughtful reflection of how our time more resembles the Thirties than the Noughties.’ Daily Telegraph